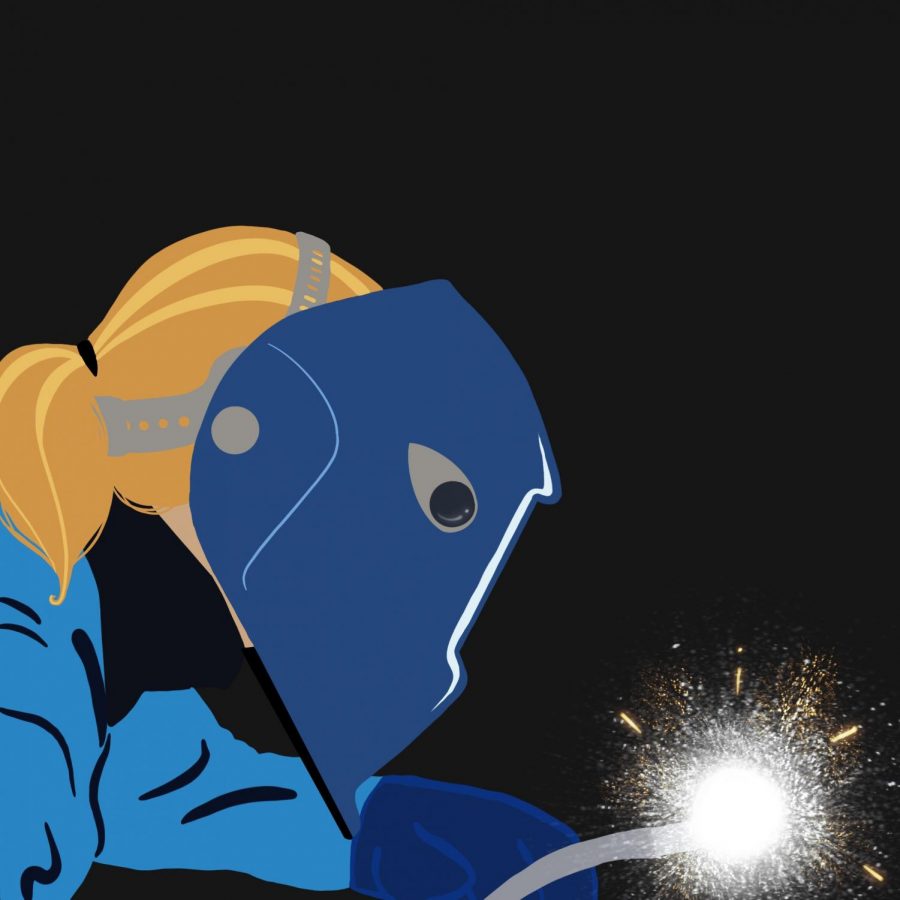 “On most of the jobs I worked I was the only woman working,” said Linda Hartman, who described her experiences as one of the first female welders on the American pipeline.

In 1989, Hartman started as a welder’s assistant for the union. She was working as a manager for a restaurant when she heard of the opportunity from a coworker.

At this time, the Equal Employment Opportunity Commission (EEOC) had sued the union and required them to sell union books to women and minority workers. Union books were $600 at the time, which could be worked off from each paycheck.

The EEOC then created a program for union workers to send in applications for welding school. This was the beginning of Hartman’s 10-year stint as a welder on the American pipeline. Hartman started in Columbia Tennessee with one other woman.

“I was pretty sure she wasn’t going to make it,” Hartman said. “They sent us letter after letter saying, ‘it is cross country there are no [bathrooms], and you will be on mountaintops and swamps.’ They put that in every paragraph and the first day we worked that girl was like, ‘where’s the bathroom’ and I started laughing and said pick a tree, she didn’t even last a day.”

Being one of the first women to work on the pipeline, Hartman faced some discrimination.

“A lot of them [men] weren’t happy and tried to make it difficult, mostly through dirty jokes or cold shoulderin yah,” Hartman said.

Hartman did not let their humor bother her and usually came right back at them. Throughout her career as a welder, she had a motto: “Never let em see you sweat, never let em see you cry.” The hazing went as far as marking out women on the employee bathroom and writing “bitches.”

“They got in trouble and the girls cried and went home, except for me,” Hartman said. “I got up there and crossed out the [men].”

Her constant rebellion to the jokes eventually led her male counter parts to not give her such a hard time.

The upper peninsula of Michigan, Florida, Colorado, Las Vegas and Tennessee are a small list of the locations Hartman’s team found themselves working. Hartman’s favorite location was Colorado.

“The Rocky Mountains was the most awesome thing I ever saw,” Hartman said.

“The pipe sections were 40 foot and you usually did about 3 miles of pipe a day,” Hartman said.

The conditions and equipment malfunction also played a role.

“We were supposed to be in South Dakota for six weeks and we are there for six months,” Hartman said.

Instead of per diem for living expenses, the union gave employees higher wages so most lived in travel trailers. Linda and her six kids lived in a 35-foot pull-behind trailer, occasionally renting apartments on a month-to-month basis. Each morning a short school bus would take her and the other welders out to their job site, which was typically in the middle of nowhere.

Once at the site, there were two sides of the pipe and Linda’s side was over an 8-foot ditch with only a four-by-four to walk on.

“I dreamed about it,” Hartman said. “It terrified me so bad. You had to crawl over people to swap sides.”

Linda stood by her motto and never complained about her side of the pipe. One day, her foreman asked about it and Linda expressed her concern, when asked why she had never said anything, she said, “I’m not a crybaby.”

Although they eventually swapped Hartman to the other side of the pipeline, she had earned the ultimate respect from other workers for her fearlessness.

The most memorable moments for Hartman are not the pay or the breathtaking views, but instead the comradery she had with her coworkers.

“They accepted me more than I thought they would,” Hartman said. “When my daughter was born she was sick, they put together [the emergency fund money] for us and took a list of medical equipment she needed and bought it. They were very, very good to us.”

The respect Hartman earned as a welder went beyond her capabilities on the jobsite. On top of her amazing coworkers, Hartman said that she is grateful that her job allowed her the opportunity to show her six kids things they otherwise may have never been able to see.

Hartman’s only wish is that she could have had the opportunity to work on the pipeline at a younger age.

“If it hadn’t been for the [EEOC] lawsuit, I would’ve never gotten to do it,” Hartman said. “If I was young I would have been retired with a pension and a way different life, but I don’t regret my life. I just loved welding.”

Hartman’s dream retirement is sitting at home making yard art, but “metal is money” and without a pension that lifestyle is out of reach for her these days.

Being around almost all male coworkers for 10 years, Hartman began to find herself resembling her coworkers by talking and dressing like them.

“One time we were in this little bar after work and the restrooms were divided by a jukebox, a lady’s and a men’s,” Hartman said. “It was me and all the other pipeliners and I got up and went into the restroom and some guy was hollering, ‘That guy just went in the lady’s room.’”

Hartman never grew up a girly girl and although she likes to dress up, she was not bothered by the comment and now laughs at the story.

The pipeline was not Linda’s introduction into a predominantly male industry. She had worked other construction jobs and even became one of the earliest female general managers in the restaurant industry in the early 1980s. She was interviewed previously on a book discussing women in middle management. Hartman is one of the pioneers of women’s equality in the American workforce but instead of boasting her resume, she said, “I never really thought about it, I just did what I wanted.”

The hours on the pipeline were from 7 a.m. to 5:30 p.m. Linda explained that the welders called this warehouse to knock off, this was their time from 7 a.m. leaving the warehouse until the foreman knocked on the pipe at 5:30 p.m. to signal the shifts end.

The welders typically had a two-hour trip out to locations from the warehouse, which counted as a part of their 10 hours of daily pay, although the two hours back were not. The pay was separated as 8 hours of normal wages and 2 hours of time and a half. In the event of inclement weather welders were payed from 7 a.m. to 11 a.m., regardless of the actual work time spent at a sight. However, if inclement weather restrictions became a factor after 10 a.m., they were paid for the full days work.

The typical schedule was 40 hours a week for pipeline welders. Anything over 40 hours was time and a half pay. The workers were considered self-employed, so their trucks were also given minimum wage plus 25 dollars a week for maintenance.

“My truck was making probably as much as I’m making right now,” Hartman said.

Hartman’s advice for those not considering a college degree is to get a union job, “You will have people who fight for your job.”

Plastic pipes became popular nearing the end of the 1990s, and Hartman’s 10-year profession as a welder was eventually obsolete.

Toward the end, jobs got closer to home and so did plastic pipes, eventually eliminating the need for pipeline welders. Being that she was single with a houseful of kids made long distance jobs harder to work for Hartman.

“I had mouths to feed and bills to pay,” Hartman said. “I just couldn’t be off for a year. You could collect unemployment in between, but that only lasted so long.”

Hartman marched in the 1970s for equal pay as well as against discrimination, and hopes that her previous experiences and job titles helped open doors for other women to enter predominantly male positions in the American workforce.

“I would like to see more equality for women,” Hartman said. “I am even amazed at how many people are surprised that I did that in this day and age. You wouldn’t say to a guy, ‘you were a welder?’ you know?”

Her advice for a woman entering a male dominant workforce is: “Don’t let them get to you, if they have a problem with women or race, it’s their problem and don’t let their ugliness diminish your beauty.”