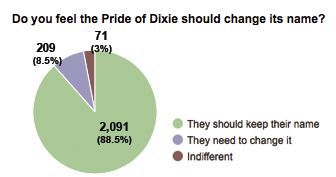 Current and former students of UNA continue to express their viewpoints on the possible nickname change for the “Pride of Dixie” marching band.

Arthur Theil, the band director in 1965, dubbed the band as the “Pride of Dixie.” 1965 was a major year in the African-American community. It is the year human rights activist Malcolm X was assassinated in Harlem and the Selma to Montgomery marches led by Martin Luther King Jr. and the Southern Christian Leadership Conference. 1965 is also the year UNA, then Florence State College, had its first African-American graduate, Wendell Gunn.

Class of 2013 alumnus Matthew Carter does not agree with the possible nickname change of the marching band.

“The name has never been an issue, but since we live in the era of progressive social justice, anything and everything can be viewed as offensive,” Carter said. “I put the blame squarely on the band director Dr. Lloyd Jones. By changing the name during the Alabama A&M game, he drew more attention to it than it should have.”

Senior Ian Downer said the university is in a gray area with a thin line between Southern pride and racism.

“Here’s the way I see it. Regardless if the word Dixie is individually offensive to someone or not is beside the point,” Downer said. “Dixie is generally associated with racism, and it is hard for me to understand why anyone would want to be accepting of something even associated with that. You can argue all day that Dixie is about heritage or Southern pride, but at the end of the day, most Americans equate it with racism and bigotry. That’s not something I ever want to be in a gray area about. It is time to move on to find something new we can all take pride in.”

A professor in the department of English, who asked not to be names, said they think the possible nickname change is wonderful and very progressive for the university.

“I’m so proud that our faculty and students have made a conscious decision to try and put other people’s feelings and histories ahead of something as inconsequential as a marching band nickname,” the professor said.

Christopher Burns, class of 2014 alumnus, said the past history should be learned and known, but not praised or publicized.

“UNA is a business, too, and now that they are D1, you’re now competing with the likes of the University of Alabama and Auburn University and that’s just in the state Alabama,” Burns said. “For the sake of business, the possible nickname change makes perfect sense because you’re trying to attract potential students from all over the world and the last thing a UNA representative wants to explain to a prospective student is why the school remains linked to one the saddest parts of United States history. Take Ole Miss as an example. In 2003 the school decided to change their mascot from Colonel Rebel to Landshark Tony. We now live in a world where people of color are pushing barriers and setting milestones all over the world. Times have changed. I understand that there will be people who will suggest to others that they should do research on the word Dixie but how far can you go without coming back to the Confederate States of America? Interpretation is so key here because over time the meanings of words change. It’s 2018 and the Antebellum Era is still praised. We should learn and know about our past history but not praise or publicize it. The word itself probably had no intentions of being offensive but over time it did.”

Senior Bryant Hasheider said at the end of the day, it does not matter and it’s for the best that the nickname is changed to something that does not have racist connotations, whether people believe that it does or not.

“I’d like to preface this by saying I’m not and never have been a member of the Pride of Dixie, so I don’t have an emotional connection to the program or the name like others do,” Hasheider said. “I don’t want to undermine others’ opinions by immediately saying the name should be changed, because I understand how they can be upset over the changing of a name that’s been in place and revered by many for so long.”

Hasheider said he thinks people should not jump to shutting the idea of changing the name down completely, and really need to think beyond themselves, beyond their experiences with the program and beyond the traditions that they’ve been surrounded by.

Former “Pride of Dixie” member and class of 2018 alumna Becca Dugger said she commends the band for being proactive to the situation and respectful, but the name is a name known all around the South and across the country.

“In my opinion, the context of which the word Dixie is used is referring to the geographical term, not the history behind it, like Alabama’s state nickname Heart of Dixie,” Dugger said. “The history has never been associated with the band or university, and it’s not what I think of when I hear the name. The Pride of Dixie is one of the most prestigious bands and the awards and accomplishments the band has received are what people think of when they hear Pride of Dixie. UNA has a rich history of tradition and I would like to see this name carried on.”

Zach McKinney, another former Pride of Dixie member, said he is not happy with the fact it is a problem.

“The name has been around for years and it’s just upsetting that people want to say that name is offensive when in reality it’s not,” McKinney said. “It’s sad how everyone is so separate and have different outlooks nowadays. I, 100 percent, don’t believe in the name change. We should ask UNA why they are deciding for a name change then? It’s just sad how racism gets brought up over the words ‘Pride of Dixie’ when in reality there has been many many different races in that band for years, and it’s never been an issue. There is no hate in that band. It’s sad and frustrating.”

Jake Presnall, former “Pride of Dixie” member and class of 2016 alumnus, said the band was the reason he chose to attend UNA and study music.

“Honestly, it’s more than just a name” Presnall said. “The name invokes a lot of happy memories. The name immediately transports me to the place that I called home for four years. I am personally fine with the name just as it is.”

Senior Jonathan Wells said he does not believe the name of the band itself is bad and it is another excuse for people to become more divided.

“Dolly Parton changed her show ‘Dolly’s Dixie Stampede’ to something else just to avoid this issue,” Wells said. “Some people think it excludes certain people, but I believe for our university the actions speak louder than words. We have a very diverse campus that every faculty member is proud to share. We have no reason to change the name, because we take pride in every student that comes to the campus.”

Connie Ward, class of 1994 alumna, said she thinks it is ridiculous to change the nickname and the term Dixie is not meant to be offensive in any way.

“In these times, it seems to me that a small minority of people are offended by any and everything,” Ward said. “My opinion is leave it alone. There’s bigger issues in the world and on a college campus than the nickname of a good football band.”

“As an alumni and going to back to Braly to watch a football game, I still love hearing the announcer introduce the ‘Pride of Dixie’ as they begin their show,” Bullock said. “I think this situation is getting out of control and nobody has had a problem with the bands nickname before so why start now? I know a lot of locals and alumni don’t want the name to change, my family included. The Pride of Dixie is getting a lot of exposure when they travel to do shows which means exposure for the university where they normally won’t get it.”