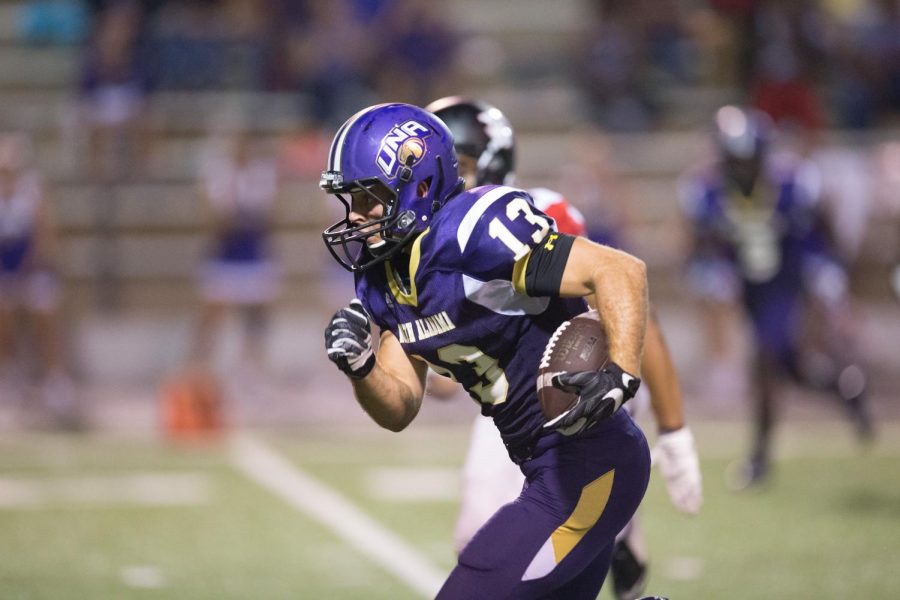 Junior wide receiver Jacob Thomas takes a reception into the end zone for a touchdown against Valdosta State Sept. 17 at Braly Stadium. Thomas’ career began as a quarterback at Troy University before transferring to UNA in 2013.

Not all fairy tale endings have a smooth journey, and UNA football player Jacob Thomas might just be living proof.

The 5’8’’ junior receiver from Clay-Chalkville high school was a standout quarterback in high school, leading the Cougars to multiple playoff appearances. Thomas then received an opportunity to play at Division-I’s Troy University.

But the story would not end there.

After “not fitting in” at Troy, Thomas looked for places to transfer with intentions to play quarterback. He eventually found his way to North Alabama in the 2013 season, expecting to compete for the starting job.

Once again, Thomas’ desire to fit would not come to fruition.

“When I came in, I thought it would be more of an open job, but it wasn’t,” Thomas said. “That’s just the way things go.”

Thomas received a redshirt for the 2013 season, then came into 2014 as a scout team quarterback. He was third on the depth chart behind quarterbacks Luke Wingo and Jacob Tucker.

Thomas said he would be lying if he said thoughts of transferring never entered his mind during that time.

“It was a thought,” Thomas said. “But I love UNA, and I love this football team. It was more of an emotional panic type (of response). I’m very stubborn, and I wasn’t going to settle for not playing here.”

Nonetheless, Thomas continued to compete with passion in every practice, earning him the nickname “Rage” among his teammates, said Tucker, the current quarterback for the Lions.

In the fifth week of the 2014 season, Wingo and Tucker both were suffering from injuries. Thomas would receive the nod to start, leading the Lions to a 27-6 victory. He finished 8-for-16 passing with 223 yards and one touchdown in the only quarterback start of his career.

Wingo returned from injury the following week against Florida Tech, once again putting Thomas on the sidelines holding the clipboard.

When Thomas realized later that playing quarterback might not be a possibility, he went to then offensive coordinator Cody Gross and asked what he had to do to utilize his athleticism, he said.

Heading into the 2015 season, Thomas moved from quarterback to wide receiver.

“Luke (Wingo) had been starting for three years, and I knew that wasn’t going to change,” Thomas said. “I just said (to Gross), ‘I want to play,’ and that I would do whatever I had to do.”

Fast-forward to 2016, and the move is paying dividends. Thomas scored his first career receiving touchdown against Valdosta State Sept. 17. He has six receptions for 131 yards on the season.

UNA wide receivers coach Ryan Aplin is in his first year with the Lions and missed the early part of Thomas’ career. Nonetheless, Aplin said he sees the same fire Thomas had while carrying the burden of not touching the field.

“For a guy to move from a position he loves to another position just shows the unselfishness you have to have in order to be successful,” Aplin said.

Thomas said while the journey has not been easy, he would not trade it for anything.

“If something crazy happens, and I have to play quarterback, I’ll play it. But I’m a wide receiver at UNA, and I’m happy about it.”