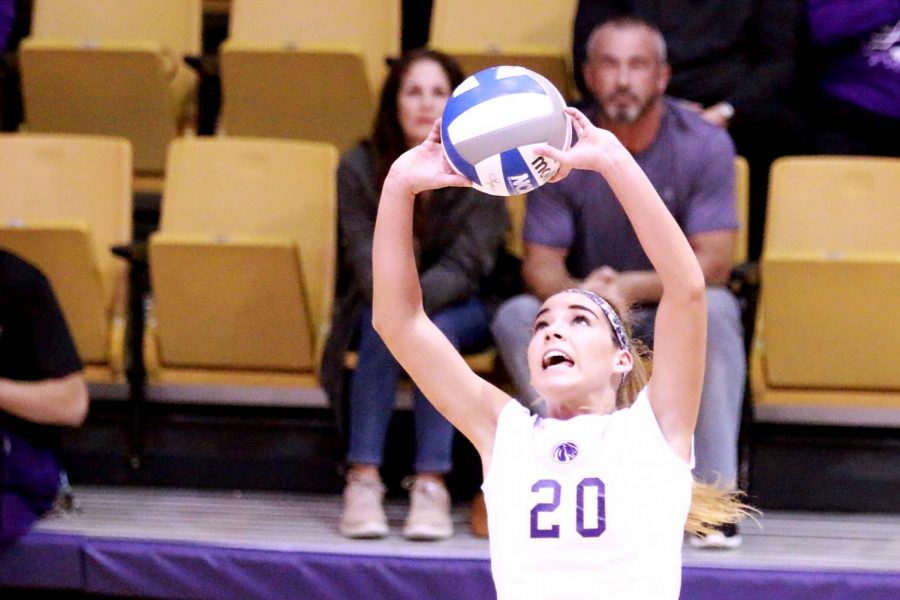 UNA sophomore setter Jayden Davila-McClary lobs up an assist in the match versus the Lee Flames Oct. 21 at Flowers Hall. Davila-McClary placed the Lions in scoring opportunities frequently through the night with 36 assists.

The UNA volleyball team faced the Lee Flames Oct. 21 in the inaugural “Bacon Night” and came away with a 3-0 victory in Flowers Hall.

“Defensively, I think we were pretty scrappy tonight,” said UNA head coach Stephanie Radecki. “Our defense has stepped up and is playing really well, so that’s nice to see.”

Junior libero Ashtyn Kapovich led the defensive stand with 16 digs, and senior outside hitter Peyton Lang had 12 on the night.

The first set was business as usual for UNA as they won the set, 25-16.  Sophomore setter Jayden Davila-McClary ensured the team had plenty of scoring opportunities with her 15 assists. Senior outside hitter Natasha Fomina led the Lions in kills with 5.

The next two sets were a rare sight for Lions fans at Flowers Hall as the Lions won by six (25-19) and five (25-20) points, respectively. The last time they won a set at home within a margin of five points was the third set of the match versus West Alabama Sept. 13.

Offensively, Fomina finished with a team high 16 kills and Lang added another 10. Davila-McClary totaled 36 assists on the night, averaging 12 per set.

The victory over Lee gives UNA its 20th win of the season and 10th GSC victory.

“I was real excited about the victory,” said senior defensive specialist Sarah Ann Tillery. “We had kind of a tough match against them on the road earlier this year, so we wanted to take care of business tonight and I think we did that.”

The Lions look to avenge an early season loss at Shorter when the Hawks visit Florence Oct. 21.