Lions fail to catch up to West Alabama 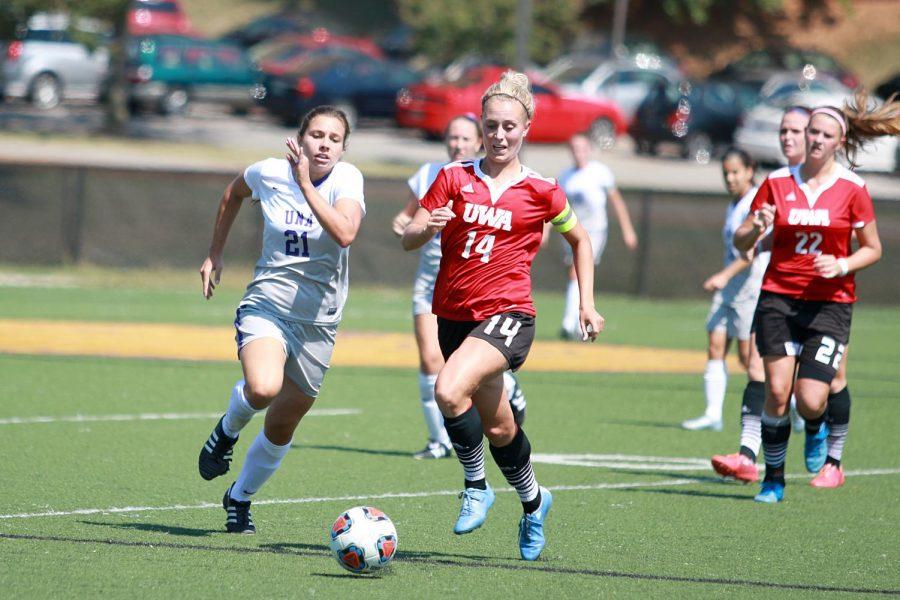 Sophomore midfielder Margarida Sousa (left) chases the ball during a match against rival West Alabama Sept. 25. UNA lost to the Tigers 3-1 and fall to 2-2 in conference play.

The Lions, (3-5, 2-2 GSC) had plenty of opportunities during the game with 14 shots taken, but could not overcome the momentum the Tigers (5-2, 3-0 GSC) generated early with two first half goals.

“We were a little set back, and didn’t attack in the first half,” said UNA head coach Chris Walker. “We competed more in the second, but we made a mistake towards the end as we were pushing.”

The game was a tale of two halves, as the Lions cut into the two point defecit with a penalty kick goal from senior forward Ele Costello in the 56th minute.

Costello led the team with two shots on goal.

“We didn’t get the win,” Costello said. “We can’t dwell on it. We’re just going to have to get better in practice this week.”

The Lions took 11 second half shots but could not find the equalizer. West Alabama capped off the victory with a goal from freshman forward Isabella Gill.

UNA won the corner battle, as the Lions had seven and held the Tigers to one.

Sophomore goalkeeper Kate Webster had four saves on the day, despite giving up three goals.

The Lions begin a two-game road trip next week when they travel to Spring Hill Sept. 28, before venturing to Pensacola to face West Florida Oct. 2.

UNA will be back in Florence Oct. 12 to face Delta State.