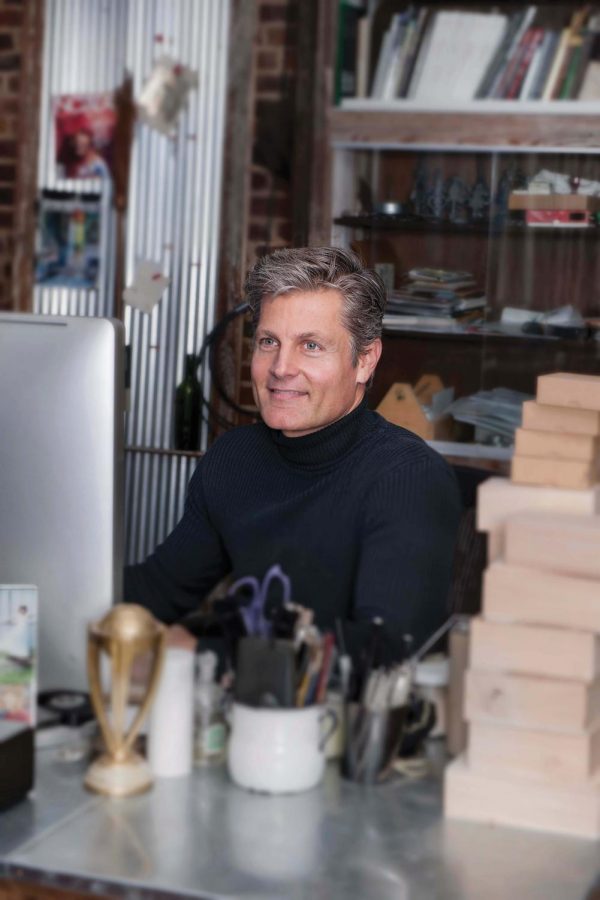 Assistant Professor of Art Robert Rausch works at his computer at his design company GAS Design Center in Tuscumbia. “I realized how much easier it was to take the photographs for certain projects I designed,” Rausch said. “I managed to combine my two loves, and I am happy that I made the decision.”

Photography celebrated its 177th birthday Aug. 19, and it has gone through many developments. Robert Rausch, the new assistant photography professor, plans to bring some of the changes from the recent years to UNA.

“There are so many things that can be done with photography, and I want my students to experience all of them,” Rausch said. “Currently, the program is film-based. I want to update that.”

Rausch said while he teaches photography at UNA, his primary job is design. He has had a design company in Tuscumbia for the past 20 years.

He said after five years of design he decided to find a way to do both.

“I realized how much easier it was to take the photographs for certain projects I designed,” he said. “I managed to combine my two loves, and I am happy that I made the decision.”

Rausch said he decided to teach at UNA because the opportunity presented itself.

“I really didn’t think that I would get the job because I don’t really come from an academic background,” he said. “Even though I’ve been teaching adjunct for a while, the other candidates that they had were probably stronger in structures and had more credentials in academia than I did. So, it was a long shot, but I felt really passionately about photography and the arts, and about our community.”

Rausch said he has been teaching as an adjunct professor at UNA since 2001.

“My heart has always been in Alabama, but I moved to Alabama when I was 8 and moved away when I was 13.,” he said. “So from 8 till 13 i lived here and have always called Alabama home.”

He said he was glad to have the chance to teach in Alabama.

Sophomore Anfernee Mainer has taken photography classes before. He said his first class was with Rausch.

“I honestly don’t know too much about (the program), but I can say that (it) is in good hands because the instructors are really passionate about photography and know their stuff for sure,” he said in an email.

Rausch said he has many ideas for the program, but he does not know what he can and cannot do since he began work Aug. 22.

“I do know that I want to change classes and add some fun classes,” he said. “I would love to teach a cellphone class. It would be a photography class focused on a smartphone’s camera.

“I would also like to branch out into the community and pull from the talent we have into the photography department.”

Rausch said he hopes to take a select number of students on a trip to the birthplace of photography, Paris.

“I want them to experience photography there because photography in Paris is different than in America,” he said.

Paris is where it began, so new styles and techniques tend to crop up, he said.

“I think it’s a good idea because there will more to learn so students can sharpen their skill in photography,” he said.

Junior Graci Berryman is not a photography major, but said she wishes she could take one of Rausch’s classes.

“I’m not that great at working with a camera, but I’m interested in learning how to take good photos with my (phone) camera,” she said.

Rausch said these plans will help him achieve his goal of helping students choose their academic direction.

Rausch said all of his life experiences have led him here, and he is thankful for it.

“I live in this community, I’ve been a part of (it), and I think that it is a wonderful opportunity for the department to really integrate with the arts (locally),” he said. “I’m grateful that I have the chance to make that happen.”