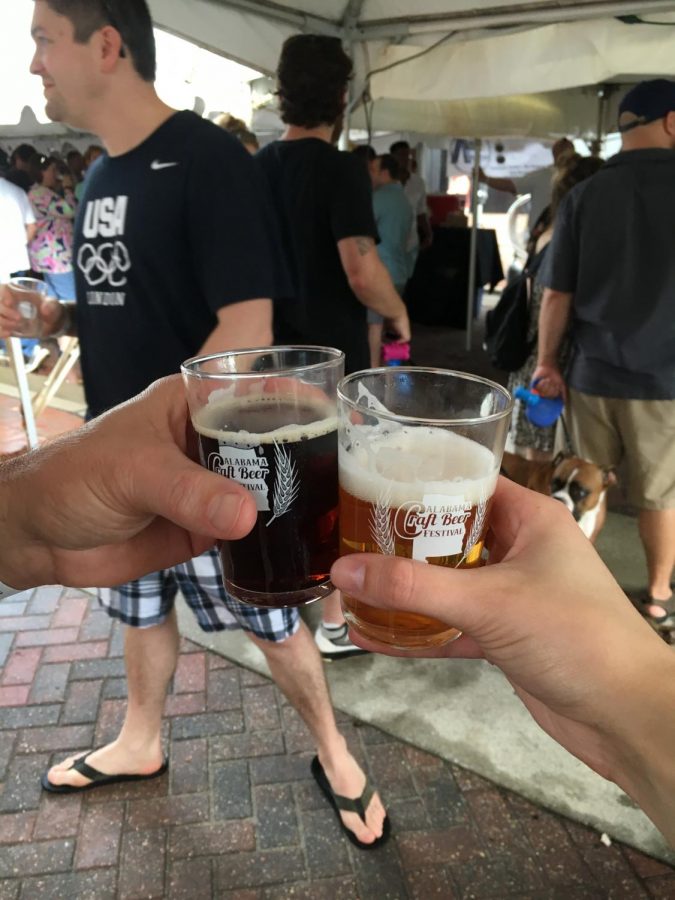 My dad and I share a toast with our complementary sampling glasses. The Alabama Craft Beer Festival's "Penny Beer" Garden in downtown Florence featured over 50 beers.

I dashed under the tents of the inaugural Alabama Craft Beer Festival Aug. 13 to escape the rain and sample the winningest beers Alabama has to offer at the festival’s “Penny Beer” Garden.

Craft breweries from all over the state competed in the Alabama Craft Beer State Championship, and booth after booth of the winning beers unfurled along Mobile Street in Florence. I wove my way through the people crowded along this glorious line of booze and sampled my fair share of delicious craft beer.

My dad, Beer Connoisseur Mike Davis, was close on my heels. Together, we tasted brews from all over the state out of our complementary sampling glasses.

Craft breweries from Huntsville to Tuscaloosa poured the best they have to offer, and my father and I happily stopped at each booth, handed over our glasses and proceeded to drink up.

Despite the rain, people stood shoulder to shoulder under the tents to get a taste of Alabama craft beer. Glasses clinked and laughter swirled above the dripping sound of rain as fellow beer lovers discussed the flavor, color and aroma of their least and most favorite beer.

At $40, tickets were not cheap but definitely worth it. Each sample was supposed to cost an additional penny, according to the festival’s website.

However, my fanny pack full of pennies went to waste because no one collected penny donations.

I would have gladly sacrificed my stylish change purse for all of Black Forty’s “Truck Stop Honey.”

Although it won one of the silver medals out of roughly 50 beers present, this beer won gold in my heart. The brown ale, made with Alabama Wildflower Honey, had me coming back for a third taste.

The ground got a healthy taste of Blue Pants Brewery’s “Wheat W/Peach” because we could not stomach the sickly sweet flavor.

Overall, the festival offered a wide variety of interesting and tasty local beer. I will be there next year, and if you did not make it this time, I recommend you join me.

Although the rain prevented any live music, the sky cleared up toward the end and the sun shined on this successful festival.