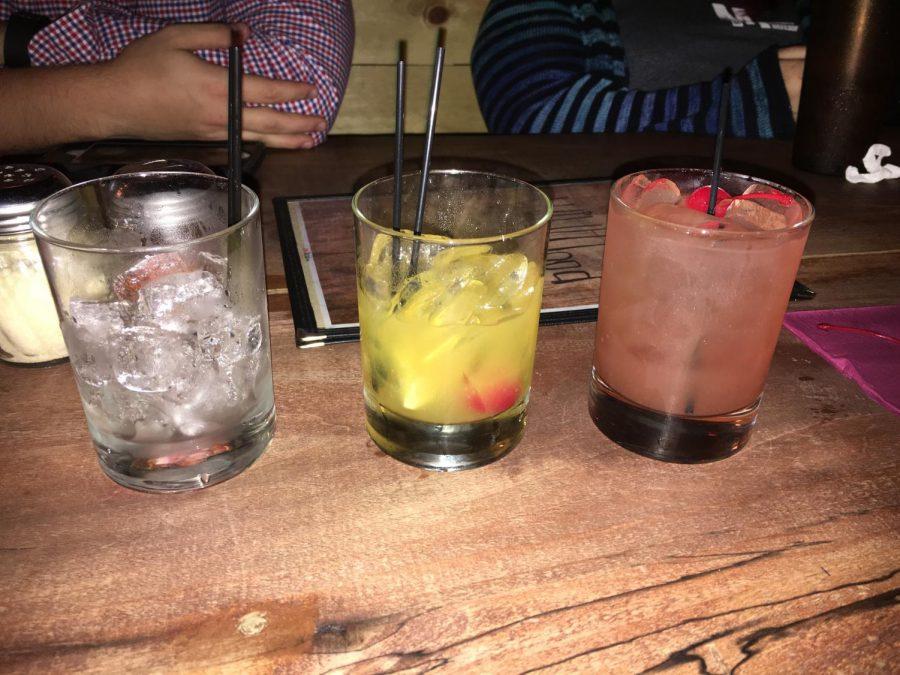 The Regulator (left), Eternal Sunshine (middle) and Groovy Notion were the staff’s picks for the taste test. The staff’s over all favorite was The Regulator.

Students voted on their favorite bar in town, and Wildwood Tavern received the honor with 58 percent of the votes.

On The Rocks followed with 29 percent, and FloBama placed third with 9 percent of the votes.

A few members of The Flor-Ala staff grabbed a booth at the bar to check it out. Managing Editor Jasmine Fleming, Life Editor Melissa Parker, Associate Sports Editor Justin Jefferies and I scoped out the bar’s new menu.

The server did not waste time carding us. Instead, we ordered and immediately started taste testing.

Jasmine tried Eternal Sunshine, a citrus vodka concoction. Parker went with The Regulator, a mixture of honeysuckle vodka, Malibu rum and juice. Justin opted out of the cocktail trend and tried Sierra Nevada Otra Vez, a sour beer. Since I did not go to the beach over spring break, I brought the beach to me with the Groovy Notion. The drink was a mixture of vodka and pineapple juice.

M: (The Regulator) was not too strong. I like it. Actually, that’s really good. (The server) said it was potent though. I’m not tasting all the alcohol yet.

K: Give us your first impression.

JF: I could taste a lot of the alcohol in it. It’s very fruity, and it makes me think of SunnyD. It’s pretty good.

M: I like The Regulator because I don’t like a strong alcohol taste, and I don’t have that. Although he said it was potent, so it may kick in here shortly.

JF: I also enjoy it’s a dollar off for the happy hour special.

K: What about you, Justin? Do you like (Otra Vez)?

JJ: Yeah, it’s in between wheat and lite beer I would say. It’s not bitter. So it’s not like a stout or an IPA or anything, which is good for me.

JF: Also, I like that there’s so much fruit in here because it kind of makes it feel like it’s healthier, you know?

K: It tricks you.

JF: Well just for the record, I feel like the glass is smaller than I expected, and I feel like I got less than I would at other places.

K: OK, so my overall take on Groovy Notion was it’s a groovy B plus.

M: So Jasmine is done with her beverage.

K: I am too. These packed a lot of punch for being so small.

JF: I definitely agree. I feel kind of like I had something much larger

M: I really liked (The Regulator). I would recommend that to anybody who doesn’t like a lot of really strong alcohol.

K: Same. The Regulator won to me. (The Groovy Notion) is pretty stout. (It gave) a good buzz.

JF: For what I got, I would’ve probably felt better if it was like five (dollars).

M: (The Regulator) was a pretty good, strong drink. Now, I’ve been to some bars where I’ve spent 14 dollars and gotten nothing.

JJ: I really mixed it up today. Usually when I get a beer menu, I look for the stupidest names, and that’s what I’m going to get.

M: Might as well try them all. I’m not stupid drunk so we’re good.

JJ: Give it 20 minutes or so. If you come in (Wildwood Tavern) on a weekend though, you can’t move.

To see the rest of the results for the Students’ Choice section, check out the April 14 issue of The Flor-Ala.