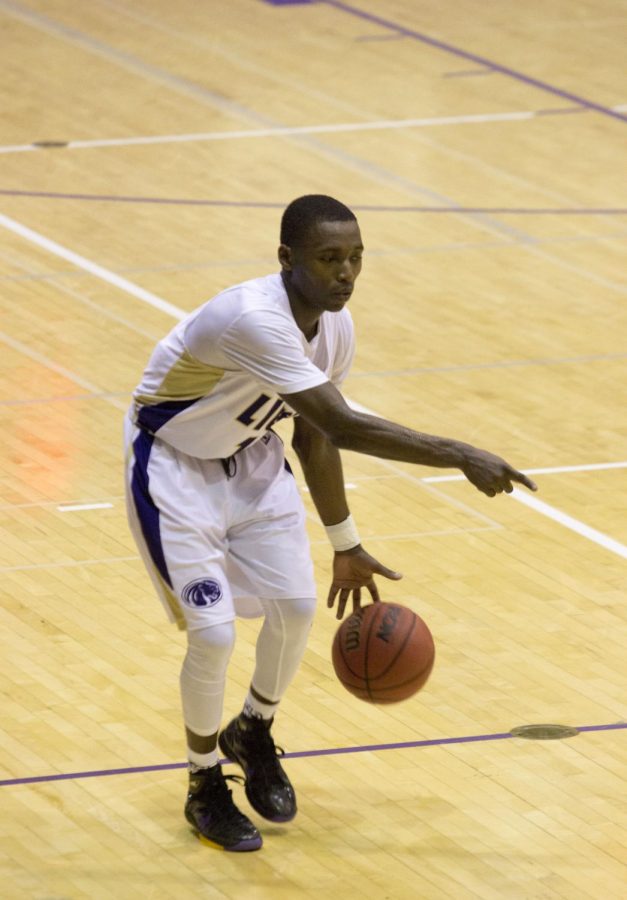 Junior guard Dimarrio Jackson runs the point position, as UNA defeats West Georgia 96-87 for its first conference win of the season. Jackson finished with a career-high 35 points, including 33 in the second half.

The Lions (4-5, 1-2) snap a three-game losing streak and earn their first conference win of the season. Jackson finished with a career-high 35 points, including 33 in the second half in the win.

“We wanted to try to keep the ball in (Jackson’s) hands and see if he can create some plays,” said UNA coach Bobby Champagne. “Dimarrio was able to either get to the basket or get the ball to someone else. He had an impressive night.”

The senior duo of John Fletcher and Bilal Richardson played a key role in the victory, as Fletcher finished with 19 points, while Richardson added 15 points with 12 rebounds.

“Everybody stepped in the game and played well,” Champagne said. “There were no drop-offs in the intensity level when we substituted.”

The win was not easy, as the lead changed seven times. With less than two minutes to play, the Lions held a slim 91-87 lead.

Five late free throws helped UNA pull away, as the team finished 35-47 from the charity stripe. Jackson hit all 13 of his free throws in a career night.

“I knew in order for us to win, I needed to be more aggressive,” Jackson said. “I just thank God for blessing me with these talents. I want to play hard every night. Whether I score two points or 40, I just want to help my team win.”

The Lions look to add a second conference win Dec. 13, as they host rival West Alabama. Tip-off is set for 4 p.m.