Tuskegee upsets Lions in second round 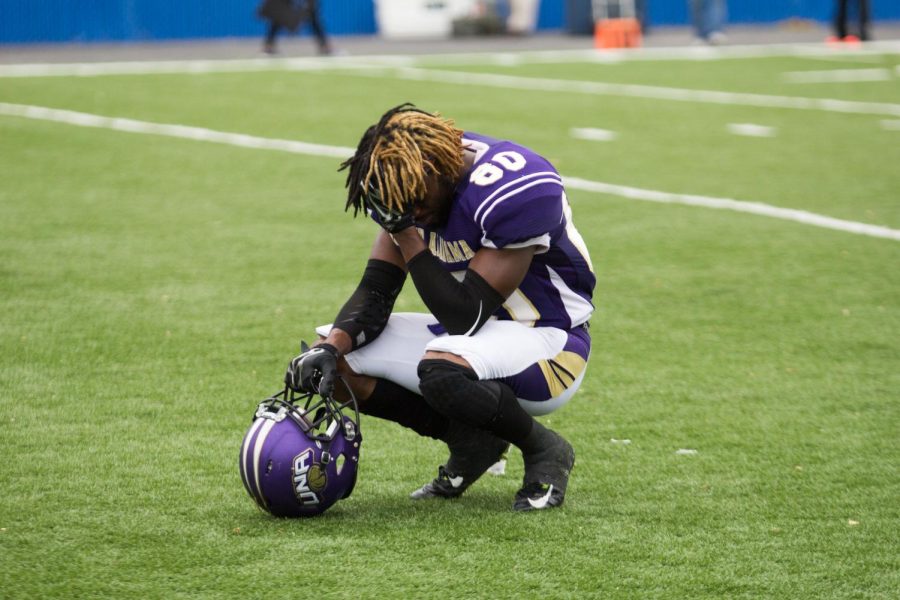 UNA wide receiver Jarret Smith crouches in disappointment after the Lions' loss to Tuskegee in the playoffs Nov. 28. The Lions end the season 9-3.

A score with 19 seconds left in the ball game shattered UNA’s dreams of a Division II Football Championship Saturday, as the Lions fell short to Tuskegee 35-31.

With a 31-28 lead, Tuskegee drove the ball down to the two-yard line. Running back Dennis Norfleet leaped into the end zone to take the lead. UNA had two chances, but both ultimately fell short, ending the Lions’ season.

“We played really bad on offense in the first half,” said UNA head coach Bobby Wallace. “We were out of sync. Defensively we played well, which kept us in the game. Offensively, we came out in the second half and played better. We gave a valiant effort to take the lead in the fourth quarter.”

“He’s a great football coach and great person,” Wallace said. “I knew how good they were, even when nobody else wanted to believe me. I’ve been there too many times against this team.”

Tuskegee took a 14-10 lead into halftime, with UNA’s only scores coming on a James Rivers interception return and Kevin Henke’s 39-yard field goal.

The Tigers extended its lead to 28-17 heading into the fourth quarter. Following another field goal UNA senior quarterback Luke Wingo scored from one yard out. Wingo found senior Lee Mayhall on a pass toward the pylon, as Mayhall found the end zone to tie the game.

With 3:54 to go, Henke nailed his third field goal, giving the Lions the 31-28 advantage before Tuskegee’s final score late in the game.

For Wallace’s first senior class since his return to the helm at UNA, their careers came to an emotional and unexpected end.

“I hate to see it end like this in the second round at home,” Mayhall said, who played his last game in a Lion uniform. “I didn’t think it would ever end. I was trying to savor that last moment. Having all of these (teammates), I wouldn’t trade any of them for anything.”

The Tigers will advance to take on West Georgia next week in the quarterfinals.