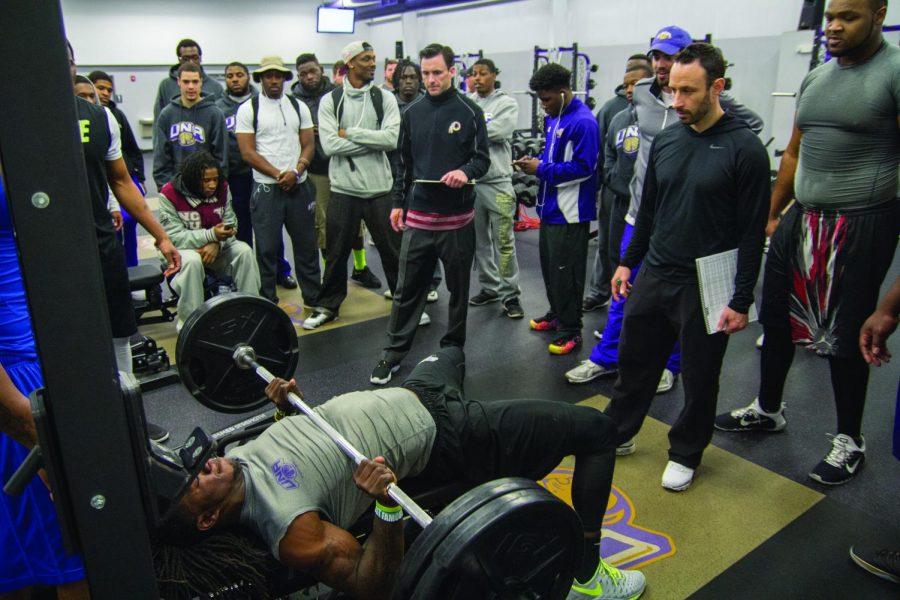 The NFL prospects started Pro Day by weighing in before going through bench press drills, broad jumps, agility drills, the Wonderlick examination and the 40-yard dash.

“I’ve been waiting on this day for a long time,” said former offensive lineman Keith Jones. “It feels great, I’ve been working for this a long time and to finally be here is overwhelming.”

Jones, who went into the workout at 6-foot-5-inches and 313 pounds, said the agility drills would be no problem for him, but the 40-yard dash may become his Achilles heel.

“One of my weaknesses would be my 40 (yard dash),” Jones said. “I pulled my quad a few weeks back during training. As far as the rest of the drills, my quick feet will be my best asset, being as big as I am.”

Jones limped to a 6.01 40-yard dash, as he grunted in pain 30 yards in, holding his right quad muscle through the finish line. Jones then went into the weight room and totaled 20 reps in the bench press.

Jones was named to the first-team All-Gulf South Conference in 2014 and second-team in 2013.

Taylor Carney, a four-year defensive lineman for the Lions, said he has been in contact with Canadian Football League teams since his graduation in December 2014. He also performed in front of NFL scouts prior to Pro Day.

“Any recognition is great,” Carney said. “I’ve had Canadian teams talk to me and NFL teams come throughout the season and talk to the coaches about me. It’s been great so far, and I love the atmosphere.”

Carney finished his combine workout with 19 bench press reps and a 5.41 40-yard dash.

Carney graduated with a degree in business management and plans to be a pharmaceutical representative. But beforehand would like to see what his future holds in football.

“But let’s see how this football thing turns out first,” he said. “I can use my degree later on.”

Carney was selected to the first-team All-GSC team as a junior and senior.

Brion James, an outside linebacker on the 2013 UNA football team, has been recovering from a knee injury and performed in front of scouts after a one-year absence from football.

James ran a 4.85 40-yard dash, which was in the neighborhood of what he was shooting for, he said. He also bench pressed 13 times and jumped farther than nine feet in the broad jump.

Other prospects who participated in Pro Day include three players from last year’s squad: Ixavier Tripplett, Shaquille Smith and Justin Sims. Sims had the fastest 40-yard dash amongst the eight, racing to a 4.53 time.

Marquez Strickland, a member on the 2013 football team, also participated in drills.

Delvin Ervin, a member of the 2012 UNA football team, who later transferred to Faulkner State Community College, rounded out the lineup for this year’s Pro Day.

The 2013 D-II Defensive Player of the Year, Tavarius Wilson, was the star of last year’s Pro Day in Florence and earned an NFL contract with the St. Louis Rams.