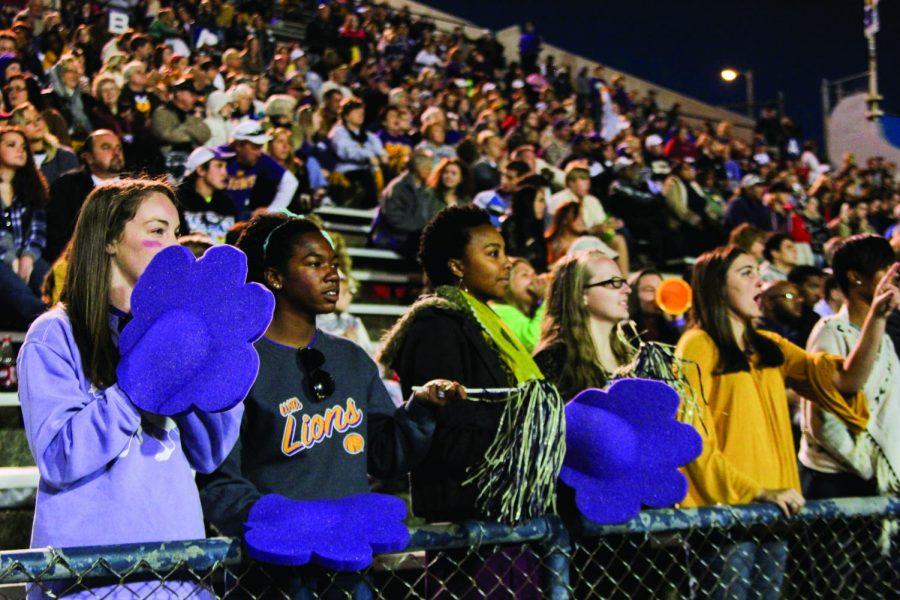 A sea of UNA fans cheers on the Lions during the homecoming game against Western Oregon University Oct. 4, 2014. The Lions won 30-10. Fans play an important role during games, said Athletic Director Mark Linder.

UNA has a strong argument for being the best fan base among Division II schools in the NCAA.

The football team ranked fourth in the nation in average attendance in D-II with 9,908 in 2013, according to a study by the NCAA.

“Nothing compares to playing at home against UAH,” said senior men’s basketball player Nathan Spehr. “The vibe you get when you are warming up can’t be explained. When you start playing, it’s on another level because it’s electric.”

Athletic Director Mark Linder said he is appreciative of the student support of Lions athletics.

“I think we have a good fan base,” Linder said. “Our student body is really buying into our promotions and supporting our teams.”

“The fact that we had 24 regular season contests (at home) with the football, volleyball and soccer programs and won 22 is significant,” he said. “I attribute that to being a great game day environment.”

There is no doubt the cheers from the crowd can be encouraging to a home team, but just as significant can be the jeering for the visiting team, Linder said.

“I appreciate when our students are witty and use their mental capabilities to promote our team,” he said. “I think when we try to make ourselves look better at somebody else’s expense, we’re getting close to the line.”

Junior Chelsea Yarber said she is a loyal member of UNA’s fan base.

“It’s really rewarding after a long week at UNA to go to a game as a way to unwind and show school spirit,” Yarber said. “I would say our university has a ton of school spirit. I would love to see more people stay throughout the game and not leave at halftime.”

Sophomore volleyball player Adrien Coffey said she believes it is important for teams to support each other at events.

“Coach (Stephanie Radecki) usually wants us supporting every home game if possible,” Coffey said. “Everyone wants to support each team because they know how much hard work goes into it.”

As an athlete, Coffey said the fans can make a huge impact on the game, whether they are cheering or booing.

“When you get booed, you want to prove them wrong,” Coffey said, in regards to the fans. “It’s reverse psychology, but when they are cheering you on, that’s encouraging; the next time I go up to hit, it makes me want to slam the ball harder and get the crowd going.”

Coffey also said the support from fans contributes to a team’s success.

“I think to have a successful team would be to definitely have fans,” she said. “You’re not just playing for yourself or your teammates but also the fans. Having that support makes you want to win for them.”

Linder said the atmosphere created by fans makes any venue a fun environment.

“When you have a full venue, it’s an interesting dynamic,” he said. “When the students show up, our corporate partners, our sportsman club fans and our community fans love watching our students cheer. Our student-athletes love playing in front of big crowds.

“It’s almost like a cycle, and if you can get it going in the right direction, it can get fun and exciting for everyone that’s a part of it.”

The spring sports are also enjoying a fair share of success.

The softball team is starting the season hot and is 10-0 at home. The baseball team is holding down Mike D. Lane field by posting a 10-2 record on its home diamond.