Softball player enjoying plenty of success at the plate 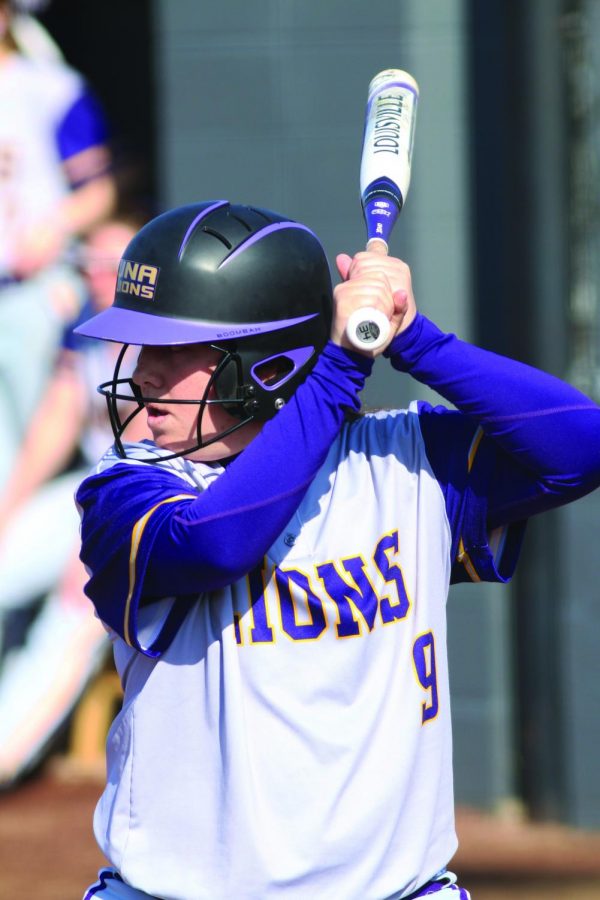 Senior first baseman Brittany Gillison awaits a pitch against the University of West Alabama Feb. 28. Gillison leads the team in batting average and is second in home runs and RBIs.

The softball team’s season started spectacular, cranking out 16 wins in the first 20 games.

The success of the team has not gone unnoticed, and neither has one of the players responsible for helping the Lions get off to such a great start.

Senior first baseman Brittany Gillison is an offensive catalyst for the Lions this season.

Through the first 20 games, Gillison batted .443, the best average on the team among players with 30 or more at-bats. Gillison is second on the team in home runs (3) and RBIs (23).

She is also third in the conference in hits (27) and second in RBIs.

“I think the key to our success at the plate is making sure we let the ball get deep and our pitch selection,” Gillison said. “We practice a lot making sure our swing is as close to perfect as possible.”

Officials named Gillison Gulf South Conference Player of the Week March 3. In the last week of February, she hit .692 with two home runs and seven RBIs.

“I think she is hitting so well because she has the confidence, and she’s seeing herself be successful,” said head coach Ashley Cozart. “She’s not thinking too much at the plate. She’s just playing the game how it’s supposed to be played.”

Gillison, a native of Pell City, was on the diamond almost as soon as she could walk, but not as a softball player.

“I started playing baseball when I was 3 years old because my Dad was in charge of city league baseball,” she said. “I switched to softball when I was 10 years old so I could begin playing travel softball.”

Gillison transferred from Wallace State Community College after two years with the Governors and brought other talented players with her.

“Bree (Blevins), Libby (Ollinger) and I all heard good things about UNA, and we loved the campus when we came on a visit,” she said. “Also, I am an education major, and I heard excellent things about the education program at UNA.”

Olinger, a former teammate at Wallace State, said Gillison is one of the best teammates she has ever been around.

“She is always encouraging others and always has a positive attitude,” Ollinger said. “She knows how to calm everyone down and pick up the team. She is a great leader not only by what she does on the field but off it also.”

Gillison’s team attitude and charisma have made her a favorite among her teammates and coaches, Cozart said.

“Brittany is one of those selfless players. She would do anything you ask her and whatever is best for the team,” she said. “She is one of our most likable players and gets along with anyone.”

Gillison said she has bonded well with her teammates she has UNA.

“One of my favorite things about playing softball at UNA is the friendships I have made with my teammates,” she said. “I have met some of the best people here who have made my last two years of softball amazing.”

The Lions host Christian Brothers University March 14 in a double-header at 4 p.m. The series wraps up March 15 at 1 p.m.