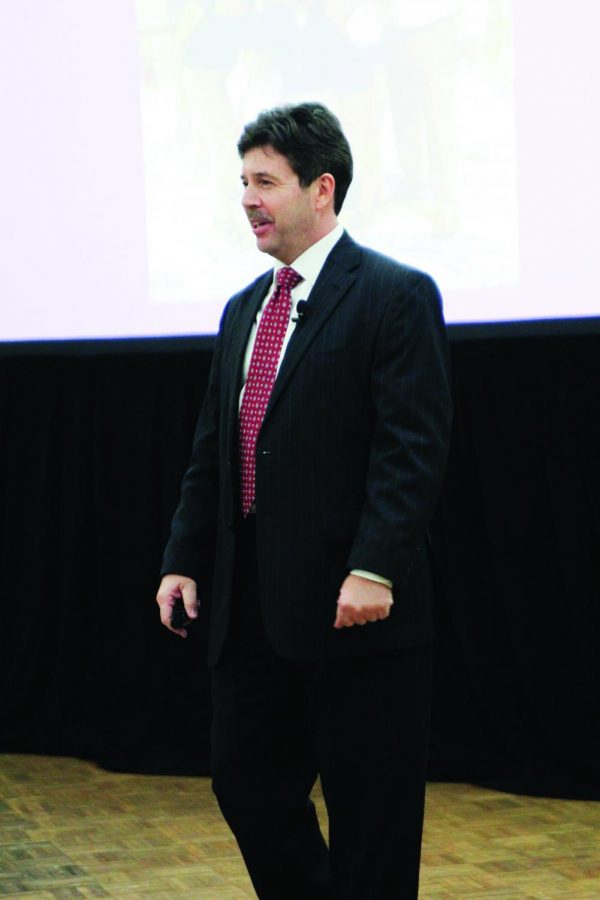 President-elect Kenneth Kitts speaks to students, faculty, staff and locals during his campus presentation Oct. 16. Kitts was selected as the 20th president by the board of trustees at its Nov. 5 meeting.

The board of trustees approved Kenneth Kitts’ three-year employment contract at its quarterly meeting Dec. 15.

“We are very excited to have Kenneth Kitts as the next president of UNA,” said President Pro-Tempore of the board Marty Abroms.

Prior to the three percent pay increase for faculty and staff approved at the board’s September meeting, the salary was just over $250,000.

Abroms said the increase was necessary to keep the salary competitive with other universities, while keeping it within UNA’s budget.

“We wanted to know we can handle this in our budget,” Abroms said. Kenneth Kitts was 100 percent on board with this.”

The contract also provides Kitts a vehicle for personal and professional use, and says the Kitts family will reside in the president’s home on campus. The university will pay up to $20,000 during the next two years for the family’s moving expenses.

“We have not talked at all about what my teaching schedule might look like,” Kitts said. I’m hired to be president.

“But, as I have said before, I think it’s important to teach when you can and be with students.”

Kitts said he plans to make a few trips to campus prior to the March 30 start date.

“We have one visit scheduled for late January to meet with legislative and campus leaders,” he said. “I’m working closely with Mr. Abroms and President (John) Thornell to learn about key events to attend so it’s not completely new on March 30.”

He said there are currently no plans for immediate administrative or executive changes.

“I’m going to begin thinking more concretely about what my initial months on the job are going to look like,” he said. “I know my way around college administration, but I’m not completely familiar with UNA yet.”

Abroms praised Kitts’ work at The University of North Carolina at Pembroke to increase enrollment, saying he thinks Kitts can help bring UNA’s numbers back up after a five-year decline.

“Enrollment is obviously a key area of concern that I want to pay attention to sooner rather than later,” Kitts said. “There are already some good things that have been set in motion. I need to get a feel for the situation so I can be a leader and decide the next step to take.”

He said he plans to take a “listening tour” across the region before he begins his tenure.

“I want to just make a few key stops to sit and listen, take in people’s views of UNA.”

He said the tour would include hearing where students, faculty, staff, parents and community members think UNA can improve.

Kitts’ wife, Dena, and his sons, Colin and Corbin, will move to campus after the children finish the current school year.