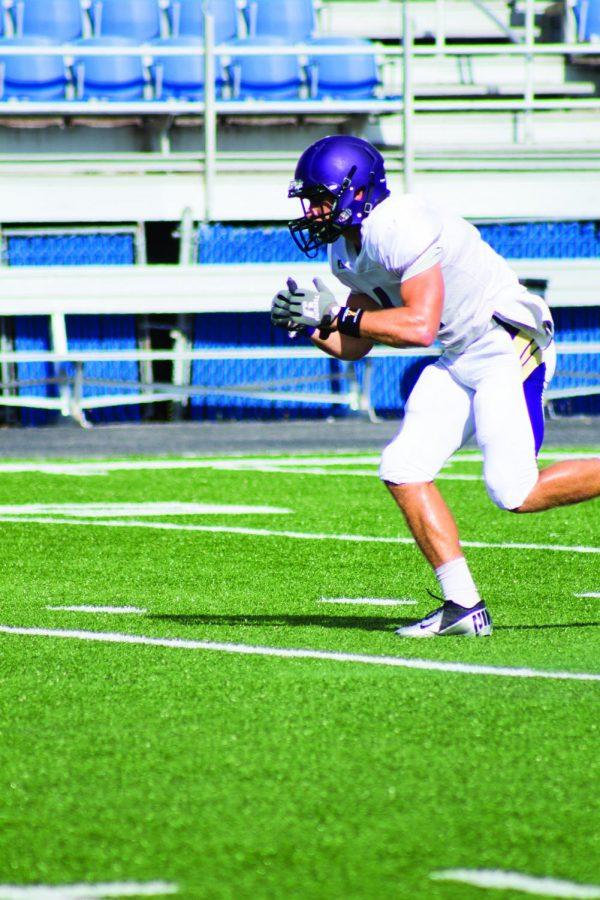 Junior wide receiver Lee Mayhall gets set to run a route in practice Sept. 4. Mayhall is the Lions leading returning receiver this year, and he led the team in receiving in the first game of the year against Mississippi College with 30 yards.

The success of UNA’s leading returning receiver from last year can be attributed to his hard work and focus on fundamentals of the game.

Junior Lee Mayhall had 41 catches for 523 yards and five touchdowns last season. In the 2014 season opener against Mississippi College he led the Lions with 30 yards receiving.

At just 5-foot-10 and 175 pounds, Mayhall is not the biggest receiver nor is he the fastest.

Because of this, Mayhall said he has patterned his game after 5-foot-9 185-pound Denver Broncos wide receiver Wes Welker.

“I’ve got to find the open hole, I’m not as fast as everybody else and not as big,” Mayhall said. “So I have to read the coverages, and run smart routes where I can find open holes.”

Not only is he smart on the field, but also in the classroom as he received Academic All-Gulf South Conference Honors last year.

Junior receiver Korey Jones said he knows the important role Mayhall plays on the team, and within the receiving core as a whole.

Jones said he believes when he and Mayhall are on the same side of the field defenses can not stop them.

The coaching staff also sees the effort Mayhall exerts when it comes to working harder than others because of the lack of speed and size.

“The first thing that jumps out to me about Lee is his work ethic,” said wide receiver coach Steadman Campbell. “He is a pretty unassuming guy. He is not 6’3”. He is not 215, but he does everything right.

Campbell said Mayhall leads by example for other receivers.